The experiences were different, from four people on a bridge braving a minus-twenty-degree windchill to a large circle of people gathered on the autumn leaves with robust drumming, but the sentiments are remarkably similar.

It all starts with a sense of urgency and gravity. Musicians led the Brandon group in singing:

We’re on a planet

that has a problem.

We’ve got to solve it, get involved and do it

We need to build a better future, and we need to start right now!

Some people worked to convince others of the facts, or of the urgency and gravity, with signs and information boards. “I had a big poster with a drawing of the earth and the message Our Earth- Care Now! … COP 27” (Kathy Cameron, Regina).

The vigil at Knox United in Brandon was indoors. This allowed the screening of videos of KAIROS / For the Love of Creation delegates describing the need for change from their perspective. In other places, such as Prospect Road, NS and Toronto, they handed out flyers to passers-by, and almost everywhere there were speeches to deepen our common understanding.

Steph Chandler Burns from Pastors in Exile helped plan the Kitchener/Waterloo vigil and wrote, “I think it was important to mark this event because the climate emergency isn’t going away. It has become a significant source of stress and despair for our communities. I want to be involved in gathering together, processing our emotions together, and spurring each other on towards action. I am better able to live in a way that cares for those around me and live in community with the created world when we meet together as a community.”

A co-conspirator in Kitchener/Waterloo, Wendy Janzen from Burning Bush Forest Church, added, “As people of faith who are concerned about the climate crisis and the health of the earth, we know it is important to include opportunities for community prayer, lament, and calls to action.”

Jennifer Smith, a founding member of For Our Kids Montreal, took a slightly more political tone, “As a parent, it was important for me to show my support for climate justice. Leaders at #COP27 need to put #KidsFirst and act to ensure a future #ForOurKids.”

The urgency of the need for change brought people together. And what did they find?

For me it was good to be involved in these actions and find hope in the companionship of others. (Margaret Sagar, Prospect Road, NS)

We felt gratified to see and hear the support for stronger climate action.  (Elizabeth Snell, Guelph, ON)

During the vigil, I felt a sense of praying with the Earth, not only for the Earth. I felt connected to other groups also praying or taking action this weekend, and to the delegations in Egypt. And I felt moved and inspired by the participants, the words, and the singing. (Wendy Janzen, Waterloo, ON)

I found it hopeful that people not already involved in groups came and talked of climate/ecological matters on a local scale where they feel they can have impact. (Tory Byrne, Prospect Road, NS)

Some of the actions were small, but size isn’t all that matters. Besides, when you put the 19 vigils together and add in all the places where a church or a family lit a candle or said a prayer without fanfare, the gathering of spirit and intention for change across the country was significant.

Kathy Cameron, one of those intrepid souls standing on the bridge in the snow and the wind, put it best, “For myself, as I drove home and pondered about how good I felt despite a small turnout, and how we measure “success”, I realized that numbers did not matter, that we were part of the prophetic witness that KAIROS calls us to be…We were community with one heart on an issue… Surely God could turn that heartfelt care into something positive towards our earth care and those folks making the decisions at the conference. We do what we can and leave the rest to God.”

Watch a video montage of images from vigils across the country. 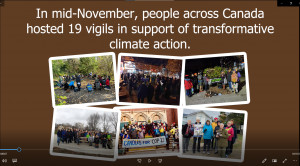 © Copyright 2020 For the Love of Creation · All Rights Reserved.